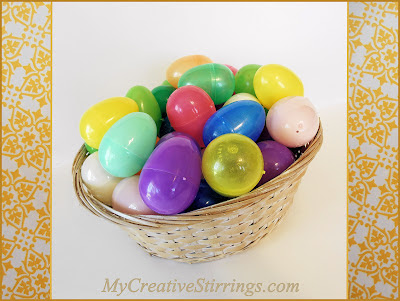 Happy Easter to one and all!  Here is a fun activity to carry out during your Easter dinner!  Section #1 is a simple version of the Easter story (Taken from: Primary 2: Choose the Right A, (1995), 247–52 Manual from The Church of Jesus Christ of Latter day Saints).  Print off 1-11 and place them in plastic eggs.  Write numbers on the outside of each egg or erase the numbers and have your guests figure out the order.  Section #2 contains eight fun interactive questions for your Easter dinner party. These could also be placed in plastic eggs.

Have a wonderful dinner!

Section #1:
1. Wicked people who did not like Jesus Christ had finally obtained permission from their leaders to put him to death. These people beat Jesus and made fun of him. They took him to a hill outside the city and nailed him to a cross.
2. After Jesus died, his friends showed their love for him by taking care of his body. Carefully they took it down from the cross. They wrapped it in clean, new cloth and put it in a tomb, which is a small cave or a room carved out of a rock in the hillside.
3. After Jesus’ friends laid his body in the tomb, they rolled a large stone over the doorway.
How do you think Jesus’ friends felt that evening?
4. Later some of the Savior’s enemies placed guards at the tomb. They did this because Jesus had told the people that he would be resurrected in three days. His enemies did not believe he would be resurrected. They thought Jesus’ friends would hide his body and say he was alive again.
5. On the morning of the third day an angel came and rolled away the stone at the entrance to the tomb. The guards were very frightened, and they fell down as if they were dead.
6. On the same day, which was Sunday, some women who were Jesus’ friends went to the tomb. They brought spices to put on Jesus’ body. This was something people at that time did to show love and respect for the person who had died.
7. The women wondered how they would move the heavy stone from the tomb. But when they arrived at the tomb, they saw that the stone was rolled away and Jesus’ body was gone. Near the tomb they saw an angel.
How do you think the women felt when they saw that the Savior’s body was gone?
How do you think they felt when they saw the angel?
8. Matthew 28:5-6
And the angel answered and said unto the women, Fear not ye: for I know that ye seek Jesus, which was crucified.

He is not here: for he is arisen, as he said. Come, see the place where the bLord lay.
9. The angel also told the women to go quickly and tell the disciples that Jesus Christ had risen from the dead (see Matthew 28:7, And go quickly, and tell his disciples that he is risen from the dead; and, behold, he goeth before you into Galilee; there shall ye see him: lo, I have told you).
10. The women did go tell the other disciples, and later the other disciples saw Jesus. He was alive again.
How do you think the disciples felt when they knew that Jesus Christ was alive again?

11. We Are Reminded at Easter That We Will Be Resurrected

When Jesus Christ died, his spirit left his physical body and went to heaven. After three days, his spirit came back into his physical body and his physical body was alive again. We call this being resurrected.
Jesus was the first of Heavenly Father’s children to be resurrected. Because he was resurrected, we will all be resurrected too. We may not be resurrected just three days after we die, as Jesus was, but someday we will be resurrected.
Section #2 (Interactive questions for your dinner party)
Have everyone share one reason they are grateful for Easter.
Allow each person to share their favorite Easter memory.
Ask everyone to tell their favorite Easter food.
Have each person set a service goal to carry out in the month of April that correlates with the Easter spirit.
Find out what everyone’s favorite Easter icon is outside of religion and why.
Ask everyone to think of a fun Easter activity or treat they would like to try out next year.
Take turns telling the group one reason you love them.
Allow everyone to share feelings they have about this special holiday.
Posted by Creative Stirrings