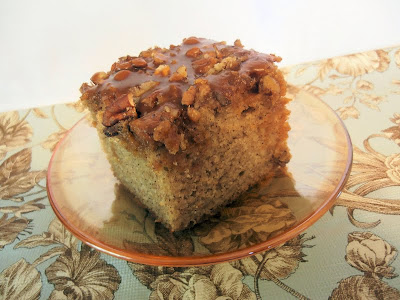 Preheat oven to 350° F.  Grease a 9*13 inch pan; set aside.  In a medium bowl combine the eggs, puree, sugar, oil, and apple sauce or yogurt; set aside.  In a large bowl combine the flour, cinnamon, baking powder, soda, and salt.  Combine both bowls and pour batter into the prepared pan.  Add 1/2 cup cinnamon chips and gently swirl throughout batter.  Sprinkle the top of the cake with pecans.  Bake for 30 minutes or until done.  Allow the cake to cool for at least one hour and then cut.

In a microwave safe bowl add the maple syrup and cinnamon chips.  Heat in the microwave until melted.  Stir every 30 seconds to avoid burning.  It should only take approximately 1 minute to melt.  Pour the topping over the pre-cut cake.  Enjoy!
Created by mycreativestirrings.com
Posted by Creative Stirrings