I saw a super cute Scrabble oriented game in Target a few months ago and debated purchasing it. Then, reality hit and I decided that $15 was kind of expensive for the cute package and so I should first find out whether the game was unique. Before reading the instructions I knew the rules. Not really...I just thought I did. I thought it was brilliant! So, I read them and was instantly disappointed in that it was simply, "Take Two" (a game people have been playing for years). At that point I was definately not going to spend $15 on a cute package...although it still was tempting! I told my other half about this weird situation and we both decided to give the rules in my head a try. Here they are. Have fun and good luck understanding my rules! 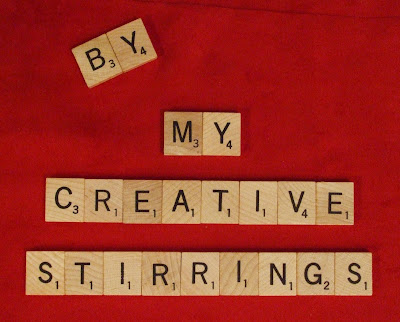 Vertical Wordical
(If you can think of a better title let me know :) )
Best when played with 2-4 players. Keep in mind that this game can be more challenging than Scrabble. 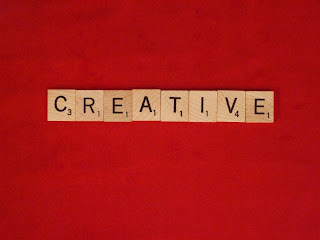 1. Chose a base word thats letters are a multiple of the number of players. The longer the word the longer the game.
i.e.- 2 players should select a word that is 4, 6, 8, or 10 letters long.
2. Turn all tiles over and shuffle. Have each player select one tile to determine who goes first. The player with the lowest letter in the alphabet goes first. Follow the circle clockwise from the first player if there are more than two players.
3. Each player draw 9 tiles and position so that no one else can see your tiles. 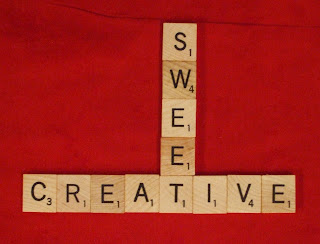 4. The game will first be played vertically. After which it will be played horizontally. Player one may spell a word either starting or ending with a letter in the base word. For example, "sweet" ends on the base word, "creative". This players points are determined by the points indicated on the tiles he/she used to spell the word (8 points using "sweet"). Keep score on a piece of paper. Replenish the tiles you use on your turn so that you always have 9 tiles. 5. Once the first word is laid down the remaining words have to alternate with the first word. Words cannot touch in this portion of the game.
6. If a player cannot spell a word with the tiles they have there are two options. Option #1- cross over the base word. Every tile that crosses over the base word will be deducted from the tiles on the correct side. i.e.- in the picture above the word, "mice" is only worth 6 points instead of 8. Option #2- you can exchange any number of tiles you wish with the tiles in the center on your turn and still play the turn. However, you can only exchange once per turn and it will cost you 1 point for every tile you exchange. 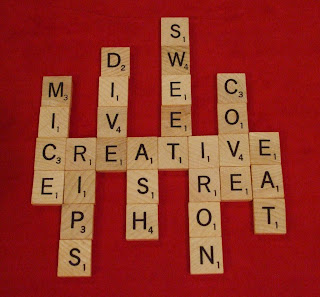 7. The vertical portion of this game is complete and now the horizontal portion begins! 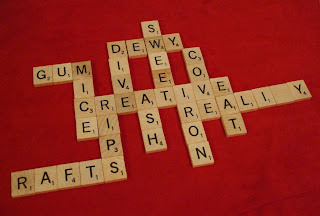 8. At this point in the game the last player goes first and the first player will go last. Every player has two turns before the game is over. Player number one will spell a word horizontally. He/she can touch any letters they wish spelling horizontally as long as all letters touching create words. The player receives points for all new words spelled.
9. After each player has gone twice the game is over. The player with the highest points wins the game.
Posted by Creative Stirrings

Ooh, this sounds like a challenge! We love playing different games with Scrabble tiles. We'll have to try!