Happy Cajun Birthday "Other Half"

My other half recently celebrated his 30th birthday.  We had quite the weekend of parties.  To top it all off I threw him a surprise birthday party on Martin Luther King Day.  He loved it...I think.  He is from the south and so I chose to create a southern themed party that would be fun for kids and adults.
The invitation said:

You are invited to a…

Please bring a southern dish to share as this will be a southern potluck! (If you do not know anything about southern food any dish will do!)

Don’t forget this is a surprise!

We had a fabulous turn out with spectacular food.  I am not from the south but I think southerners would have been proud!  Here are some of the photos from the event (a few of the photos were taken in advance). 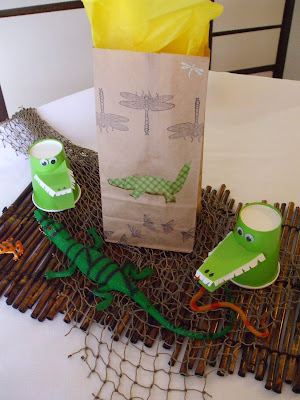 This display was in the center of each table.  I used a bamboo placemat, fishing net, decorated paper bag, embellished crocodile cups, and fake critters to complete the swampy feel. 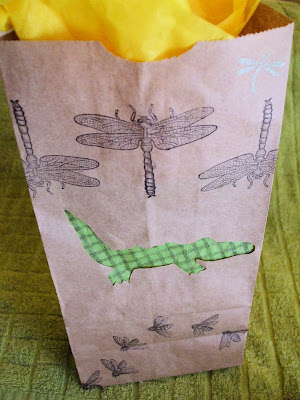 Here is an up close look at my paper bag creation.  I needed a decoration that provided height and was cheap.  However, as you may have noticed many of my decorations often have a dual purpose.  This one held fun surveys which pertained to the birthday boy and pens.  The bag was decorated with rubber stamps, black ink, and crocodile cut outs.  I copied an imagine from clip art, traced around it and then cut it out.  I placed a stamped piece of tissue paper behind the image.  Originally I wanted to use the paper bags as lanterns.  After condsidering the quantity of children that were coming I decided to play it safe and mimic light using tissue paper. 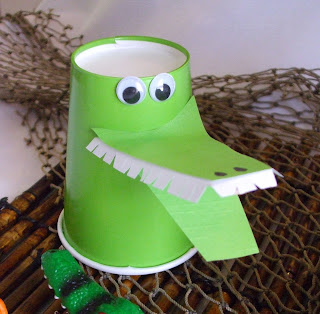 My cup creations were thought up as I stood in the party store after being told "they could not help me find items for my swamp themed party".  I want a job there as I think they are a tad confused.  As I looked at their rows of cups stacked upside down I envisioned this crocodile.  So I went home and created it.  *Crocodile cup instructions can be found at the end of this post. 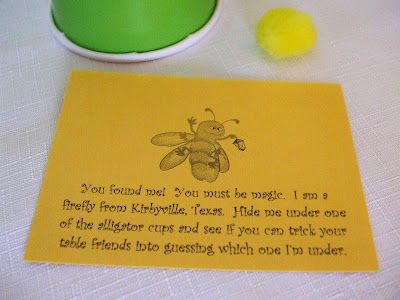 The cups were part of a game.  Every table had 2-3 cups.  One of the cups at each table had a firefly and instructions hiding under.  The paper said, "You found me!  You must be magic.  I am a firefly from Texas.  Hide me under one of the alligator cups and see if you can trick your table friends into guessing which one I'm under." 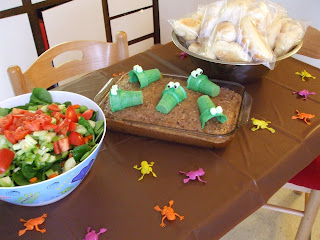 I set up a mock serving table to show what I did for the event.  I used brown disposable table cloths and then scattered cheap plastic jumping frogs all over the table, which I allowed the party guests to take home. 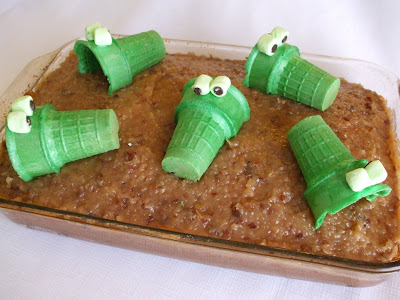 Here is cake #1.  I needed something simple since I could not decorate it until the day of.  As I was looking through my cupboards to see what I could turn into a crocodile I found leftover green and brown ice cream cones from the princess birthday party I threw.  I only used the pink ones in the package for the princess party.  I shaved off a piece of the cone so that it would sit right on the cake.  The eyes were created with mini marshmallows, mini chocolate chips, and white icing which acted as the glue. 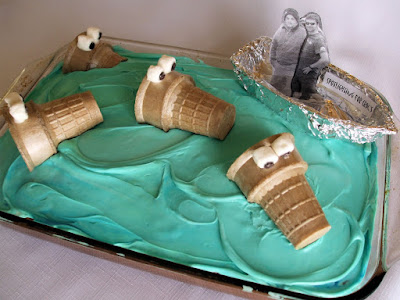 Cake #2.  I covered a toy boat with tin foil to mimic a fun past time my spouse shared with his buddies.  They loved spotlighting for crocodiles.  I think they must have been a tad crazy! 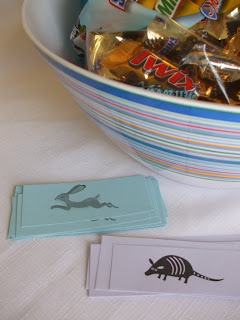 Here is another game I made up.  I called it, "Road Kill".  After the feast we cleared the tables and chairs out of the way then divided into two teams.  We had the armadillos and the rabbits.  Each team member had to take one piece of paper to the other side of the room walking, crawling, or jumping like their animal and return.  Which ever team was able to transport all animals to the other side or "across the road" and return to the starting place, won...and was not considered "Road Kill".  I felt like I was on the verge of a super amazing game.  However, I have been so busy with other thoughts this past week that I never found that amazing idea in my brain.  Maybe one of these days it will surface!

How to make the crocodile cup: 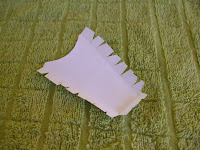 1. Trace the circle of the cup you wish to use at the point you want to place the crocodile mouth piece.  Using that circle cut a piece of paper resembling the diagram above.  I folded the outer rim 1/4 inch down then cut slits to represent teeth. 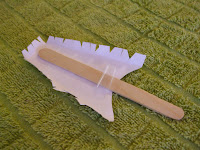 2. Attach a popsicle stick to the back side of the mouth piece using tape. 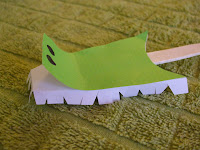 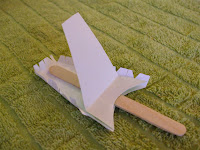 4. Adhere another piece of green paper to the underside of the teeth using tape.  Make sure the green side is facing the popsicle stick.  Bend the paper toward the back of the teeth so that this mouth piece will show. 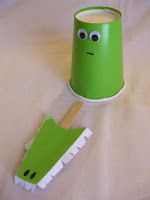 5. Glue eyes onto your cup.  Then, use sharp skinny scissors to gauge a slit through the cup where you would like to place the mouth piece.  Finally, insert the popsicle stick into the slot. 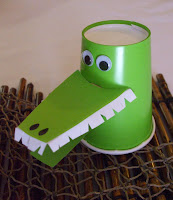 Voila!  You did it!
Posted by Creative Stirrings

Melissa, you out do your self every time. This is so cute. What a fun idea to have the ice cream cones as alligators. Perfect!

Great party. Wish we could have been there!

I always love your themed parties! My top favorites from this theme are the alligator cups and the cakes. You are quite the talented lady!

This is sooo cute!! I love the "cajun idea" and the alligator cake:) Love it, wish we could've been there!

love the alligator cups! They are perfect for my sons bedroom, he has a nature theme and I am going to flip the cups/face for pencil holders on his desk. Thanks for sharing :)