This idea isn't super wild.  I thought I would share it with those who are looking for Martian or alien food ideas.  For Halloween this year I decided to choose a lunch theme for the kids I babysit.  I decided to explore space so I created a Halloween menu centered on our un-known friends. 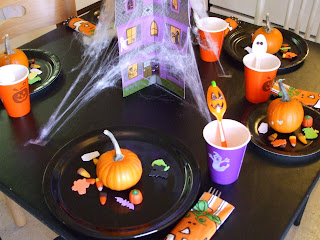 Our table setting did not have any alien element.  It was still fun.  I put a tiny pumpkin on each plate with foam stickers and candies.  Each child got to decorate a pumpkin while they waited for their food.  The candies were for consumption purposes only.  If I had all older children I would have put permanent markers on the table to aid in decorating. 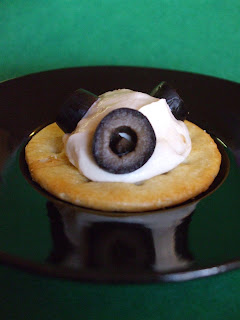 For appetizers we had Cracker Spaceships.  Using a small cookie scoop I placed a dollop of onion dip onto the center of each circular cracker.  I used sliced black olives for the spacecraft windows.  I gave each child extra crackers in case they wanted to spread the dip out. 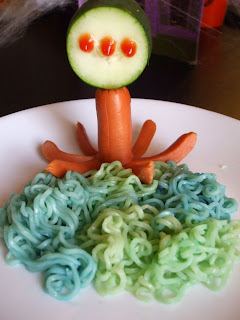 As of the main dish...I know this looks gross!  The kids loved it!  I found an idea like this years ago and cannot remember where I found it.  If anyone knows let me know so I can give due credit.  The original idea had green ramen noodles for seaweed and a hotdog octopus on top.  My creation is suppose to represent an alien attempting to take over the world...  To re-create- Slice a cucumber into 1/4 inch rounds and put dollops of ketchup for the eyes.  Insert toothpicks half way into the individual cucumber slices; set aside.  Then, cut the bottom 2/3 of each hot dog to represent tentacles.  Place the hot dogs into a pot of boiling water for 3 minutes or until the tentacles curl; set aside.  Cook ramen noodles as indicated on the package.  Drain and divide in half.  Mix 5 drops of green food coloring into one half of the ramen noodles and 5 drops of blue food coloring into the other half.  Place a portion of each color on to individual serving plates creating a circular world.  Take the cucumbers and insert the toothpick coming out the bottom into the top of the hot dog.  Stand the aliens upright on your plate.  *The longer the legs of the alien the better it will stand upright on the plate.  If it refuses to stand then assume it is taking a quick nap before it conquers our planet. 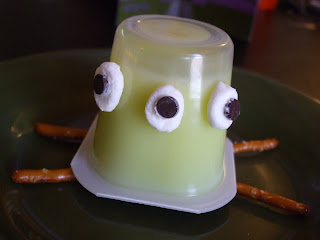 As for dessert we had alien pudding cups.  I used mini marshmallows and mini chocolate chips for the eyes which were glued on with white frosting.  The legs were made using pretzel sticks. 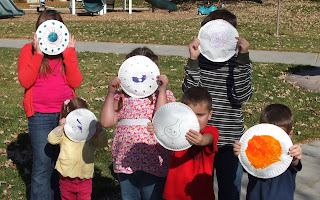 After lunch we designed alien aircrafts using paper plates.  I allowed each kid to stuff theirs with what ever object they desired.  I used a stapler to enlcose the items.  The kids used cars, leaves, bark chips, socks, and lentils.  We had competitions and learned a little more about physics.  The winner got a glorious prize.
Posted by Creative Stirrings

Super fun ideas for the alien theme! It looks like the kids had a blast.

All of that looks so scary and yummy at the same time. I wish I had an ounce of your creativity. Those are some lucky kids you watch.