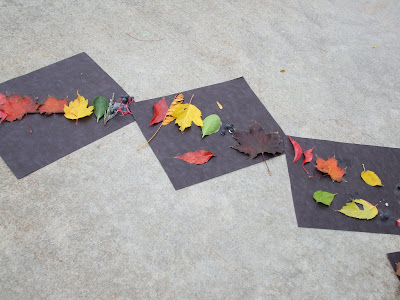 While babysitting the other day I decided to theme our day around rainbows as gray skies are here.  I taught the kids about rainbows found at http://www.wickipedia.com/.  I then told the kids that we were going to go catch a rainbow!  They were excited and somewhat confused.  I gave each of them a plastic bag and off we went!  When asking them how we were going to accomplish our mission one child responded with "let's collect the colors found in the rainbow".  I had them collect leaves of all colors and varieties.  This could be done with flowers as well. 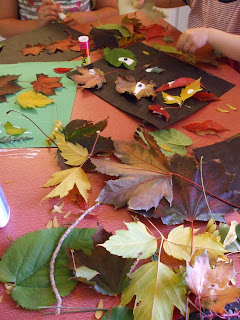 Then, we came back to the house and started gluing.  We had one colorful mess!  It brought a smile to everyone's face. 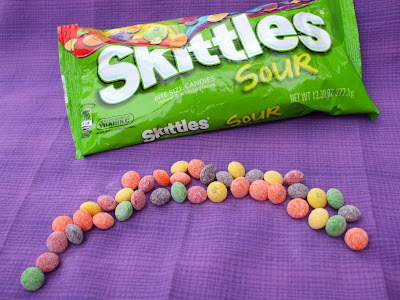 Of course we had to end our adventure with a treat...I am a little obsessed with food!  What better way to do this than to "Taste the Rainbow".  I decided to play the Skittle Game (I played a version of this as a child with different candy).  These kids LOVE Sour Skittles so that is what we used. 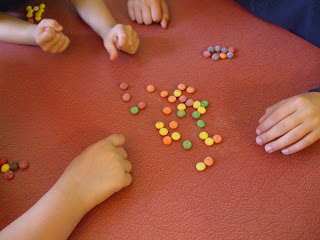 To Play: pour a pile of Skittles in the middle of a table.  Pick someone to start the game (a starter).  That person selects one Skittle without revealing his pick it to anyone else (select with your eyes only).  Then, going clockwise around the table two times (depending on the amount of players) each person takes one Skittle trying not to pick the one the starter selected.  If a player picks the selected one then he or she has to give all of their Skittles to the starter and the player to the starters left then acts as the starter.  If the selected Skittle is not picked while going around the table two times the player to the left of the starter takes over.  When all the Skittles are gone the player with the most wins the game.  This game would be great for those learning their colors.  You could use any combination of candy, raisins, nuts, money...be creative!
Posted by Creative Stirrings

Hello Thomas and Melissa! Thanks for leaving a comment on my blog. I was snooping at your blog last night when I found it on Joel and Crystals'. I love blog stalking people. Ü Melissa, you are too creative and I love Thomas' introduction to you on the side. You guys are now in my "blogs to follow" list. Ü

Hello! I noticed that you follow Yummy,yummy - my blog. I thought I would check out our solo follower and boy am I amazed! You are sooo crafty and creative and got my mouth watering! Just curious, how did you find Yummy?
katescraftcorner.blogspot.com
yummyyummyforyourtummy.blogspot.com
-Katie