7 Wonders of the World- for kids

To entertain a house filled with children I decided to create an activity centered on the 7 Wonders of the World.  First I looked up the 7 wonders on http://www.wikipedia.com/ and Googled some photos.  Then, I came up with activities that would help the kids remember each wonder and sent them on a scavenger hunt to find each one.  To begin, I gave them a small piece of paper with three words that helped them figure out where the first wonder was hiding in my house.  The clues led them to an envelope with a picture of the wonder inside and another word strip to find the next clue.  The words pertained to the actual wonder as well as where it may be found in my house. 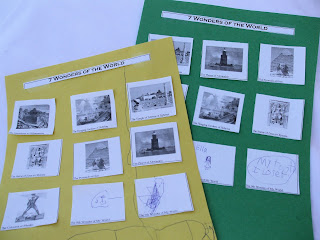 Each child stuck the picture of the Wonder found to a piece of paper lined with photo squares.

1.  Temple of Artemis- the envelope for this wonder was located on an object with a religious connotation.  We then read a bible story about temples.

2. The Pharos- (lighthouse) this envelope was located on top of a wooden boat.  We played a game where we learned the importance of light houses.  Using a blind fold we took turns telling each other how to get to a specific destination around the house without making physical contact. 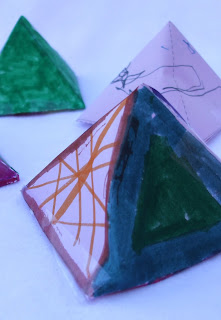 3. The Pyramids at Giza- the envelope was found attached to the outside of the oven to represent the climate in which the pyramids are located.  For the activity we made paper pyramids and filled them with goodies and notes to give to friends and family members.

4. The Colossus at Rhodes- this envelope was taped to the inside of a lamp shade.  Using large sticks we had a javelin throwing contest in honor of Apollo. 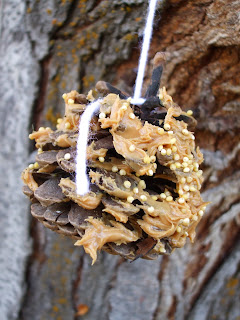 5. The Hanging Gardens of Babylon- the envelope was in a house plant.  For the activity we made outdoor bird feeders using peanut butter, millet, and pinecones. 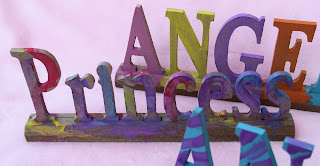 6. The Statue of Zeus- I hid the envelope next to a statue I had in my house.  We painted "statues" for our activity.  You could also mold statues using play dough. 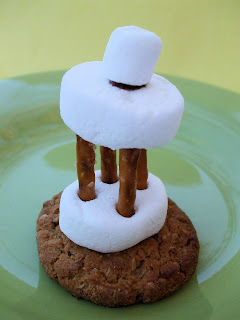 7. The Mausoleum at Halicarnassus- this envelope was hidden in our bathtub as that was the closest I could get to a tomb.  As far as the activity...it was TREAT TIME!  We re-created the tomb using circular cookies, large and small marshmallows, and pretzel sticks.

*The kids had a blast!  You could adapt this according to what you have available in your home.  I also had each kid draw pictures of the eighth and ninth wonder of their world.  Have fun exploring your world!
Posted by Creative Stirrings

What a great activity, I'm always looking for things like this, fun ways to teach and inspire a questioning mind. Love it!