Happy Birthday!  For my daughter's first birthday I decided to throw her a fish birthday party. 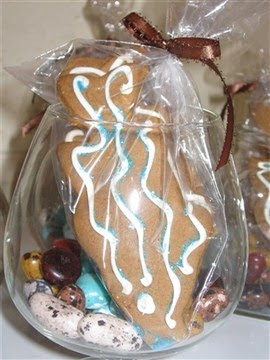 This is what my brain came up with for a unique party favor.  I bought fish bowls at our local thrift store  which can also be found at the dollar store.  After sanitizing the bowls I filled the bottom with candy rocks.  I then made and decorated fish shaped ginger cookies (to match the colorful rocks), placed them in plastic bags and tied them with brown ribbon.  For fun, I wanted to hand them a real fish (in a bag with water) before they left but my husband decided it was cruel to the fish considering they probably wouldn't survive. 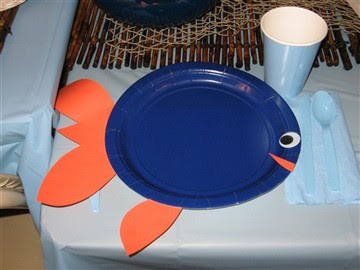 As for the plates I cut out orange, white, and black construction paper and glued it on to resemble a fish. 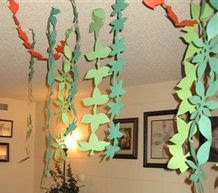 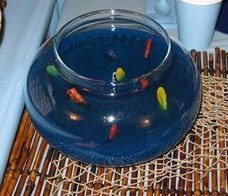 I re-used the same vines that I had used for the monkey party.  I cut them out of butcher paper.  I also hung strings of orange fish as if they were swimming through the sea weed.  The picture on the right is a blue jello with sweetish fish.  I found this idea in a Martha Stewart magazine.  I found the fish bowl at a thrift store and sanitized it for hours!!! 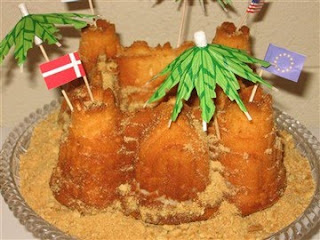 The cake was simple.  I borrowed a castle cake pan from my sister-in-law, added some graham cracker crumbs and flags and called it good.  Sometimes I really do run out of time and energy. :)
Posted by Creative Stirrings

So creative! I love it!

This idea is sooo cute! I love the plates and the cake! Leave it to you to come up with such a creative party!!! I'll bet they had a blast!! So cute!

I love the cracker crumbs for sand. I also love that the fish theme can be used for girls and boys. Makes me want to be a kid!
Raquel