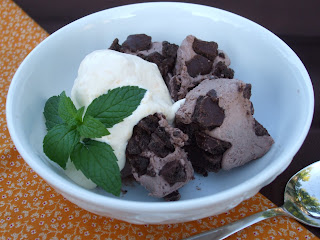 In a medium bowl whisk together the dry pudding packet and milk until smooth. Fold in one cup cool whip; set aside.

Meanwhile, puree the mandarin oranges in a blender. Pour the pureed oranges into the remaining cool whip in the cool whip container and stir until combined. Refrigerate until ready to use.

Before serving allow the pudding cubes to sit on the counter for a few minutes. Then release the cubes as you would ice cubes into individual serving bowls. Add a dollop of orange cream to the side of the pudding cubes. Serve immediately. Store left over cubes in a Ziploc bag in the freezer.

*For added flavor add a few drops of mint extract to the pudding mixture and some orange zest to the cream. You could also garnish this dessert with orange zest or orange curls.

*I was trying to think outside the box by coming up with a unique way to showcase pudding. You could run wild with this idea! I have created many combinations such as:

YUm! sounds fancy! :0) Definitely need to try this one out on my family. We LOVE ice cream desserts.