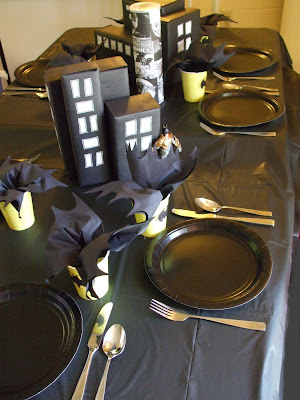 This last weekend we celebrated my sons birthday.  He chose a Batman theme.  I used black and yellow for my colors. 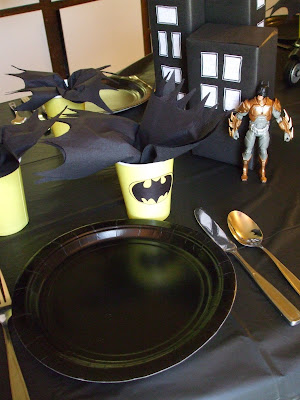 I wrapped his presents in black butcher paper to represent Gotham City.  The windows were drawn on white paper with permanent markers and filled in with gray crayon.  I did not have gifts to go inside each building so I put letters and pictures from family inside of some of the buildings.  I used my sons Batman action figures to help decorate the table. 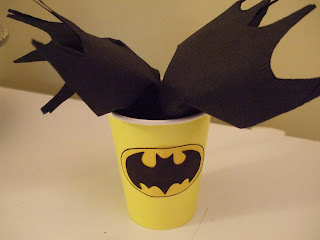 For the cups I drew and cut out my version of the "bat" symbol.  I glued it onto an oval piece of yellow construction paper and outlined the oval with a black pen.  Then, I taped it onto the cup using double sticky tape.  As for the napkins I scalloped the edges and put them in the cup to represent bats.  My son thought they represented Batman's cape.  It worked! 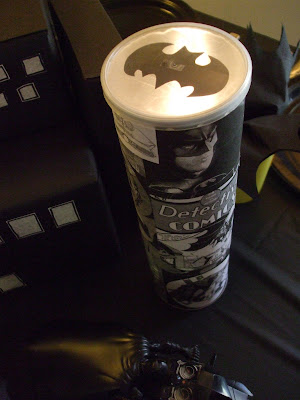 I created a bat symbol spotlight using a Pringles can.  I copied comics off the internet from http://www.wickipedia.com/ and glued them onto the can using a glue stick.  I taped a bat image to the inside of the lid and placed a bright flashlight inside the can.  Because the flashlight was so bright and my ceilings are not very high the symbol did appear on the ceiling.  It would have been super fun to have multiple cans and turn off the lights during the birthday dinner. 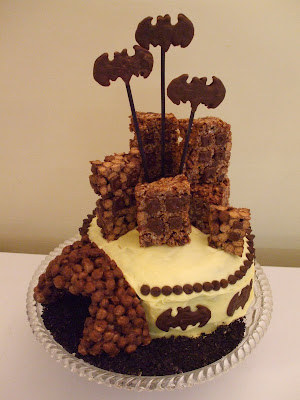 The cake was a double layer chocolate cake with yellow frosting.  I created the chocolate bat symbols by placing one of my cut outs under wax paper and piping chocolate over it.  It worked great!  The border around the cake is created with chocolate chips.  I made the bat cave out of cocoa puffs where I used a rice krispie recipe and stirred in chocolate chips to help keep the darker brown color.  I formed the cave around a small tupperware I covered with greased wax paper to get the opening to the cave.  I used crushed Oreos for the cave floor.  The buildings (Gotham) were made from chocolate peanut butter rice krispie treats.  I poured the mixture into a wax paper lined tupperware and then cut a variety of building shapes.  The windows were piped on with chocolate.  The flying bats were made by coloring cabob sticks with permanent marker (you could have dipped them in chocolate) and adhering two chocolate bats to each other using more chocolate.  We ate a lot of chocolate this weekend! 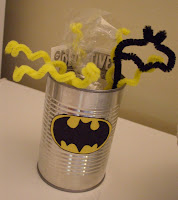 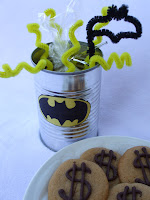 Here are two pictures of the party favor as I kept changing it.  The cans were filled with bags of peanut butter cookies that represented two sided coins.  One side of the cookie was dipped in chocolate.  I think Two-Face (a character in Batman) uses a coin???  I used the same emblem from my drinking cups on these party favors.  To curl the yellow pipe cleaners I twisted them around pencils and I bent the black pipe cleaners around a small bat cookie cutter to get the bat shape (I did accentuate the ears).  I had extra comics from my bat symbol spotlight so I wrote personal notes on them and placed one in each can.  It is always fun to send your guests home with goodies!
Posted by Creative Stirrings

I wish we were there.

This looks so amazing.

So so so fun! Now if only we could hire you for our kids' birthday parties!

This birthday party is every little boy's dream come true!!!! I hesitated to show it to my little guys, they might expect something similiar:) Wow, what cute ideas....and you are so talented!! Happy birthday (late) wish we could have shared it with you all!!!!!!

Jill, You could make a living at party planning.