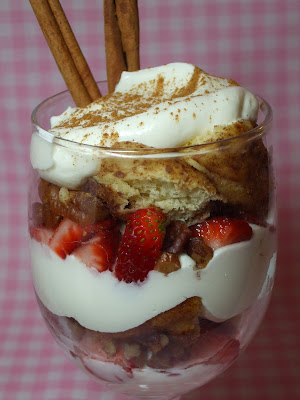 Press pecan pieces into cinnamon roll dough before baking and bake cinnamon rolls as directed on can; allow to cool.  Once cooled cut into smaller pieces.

In a large bowl, combine pudding, milk, and icing with an electric mixer until combined.  Fold in cool whip.

In a large glass bowl or individual parfait glasses layer pudding, cinnamon rolls, and strawberries.  Repeat layers until all ingredients have been used.  Serve immediately.

*The inspiration for this recipe came one day when I was trying to come up with a unique trifle recipe.  Here it is.  To decrease the sugar omit the icing.  Enjoy!

OH. MAN. mmmmmmmmmmm! I love how fancy it looks too- trifles are like that ;)