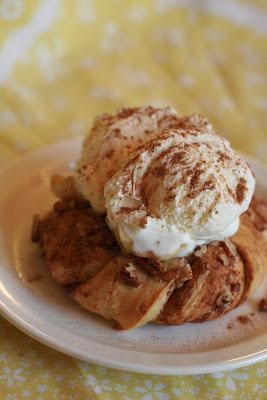 Heat oven to 375º F. Heat indoor grill to 375º F. Lightly grease large baking pan. Unroll each cinnamon roll. Cut each roll in half lengthwise creating 10 8-inch long strips. Spread pecans evenly over dough and press into dough. Place strips into pairs. Twist each pair together, form a circle with the twisted pair. Pinch the ends together and place on the baking pan. Bake at 375º F. for 18-25 minutes or until golden brown.

In small bowl, measure sugar; set aside. Cut the bananas in half lengthwise. Cut into 2-inch long segments. Gently coat the bananas in the sugar. Let bananas sit for 5 minutes. Place bananas on the grill for 1-2 minutes or until grill marks start to appear. Flip bananas and repeat on the other side. Remove from grill and place on a plate.