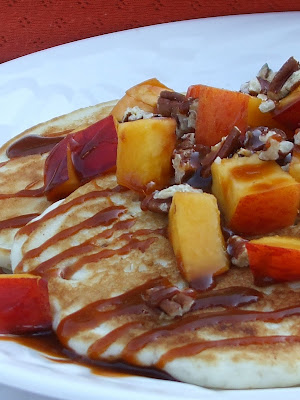 In hot griddle spread 1 tablespoon butter. Pour about ¼ cup batter onto griddle making 5 pancakes. Cook over medium heat about 2 minutes on each side or till pancakes are golden brown, turning to second sides when pancakes have bubbly surfaces and edges are slightly dry. Remove pancakes. Spread last tablespoon of butter on griddle and cook remaining pancakes.

To serve, stack two pancakes, slightly overlapping, on each of 5 serving plates. Divide peach slices among the 5 plates placing them on top of the pancakes. Evenly sprinkle pancakes with pecans and drizzle with syrup mixture; serve immediately.

These are absolutely the most delicious pancakes I have ever tasted! We made them on Saturday and they were gobbled up in no time.

Then this morning, when my grandpa asked for pancakes and peaches (separate), I used his favorite pancake mix but pulled out the leftover pecans and cinnamon chips to make a few of these fancy pancakes for myself.